Three scenarios were modelled for the study;

Using the average emissions intensity of mains electricity delivered in Victoria as calculated by the Australian Energy Market Operator, a calculation that includes all renewable and fossil fueled generation. Read more.

Graham Anderson holds a Masters degree in Environmental Science and Climate Change from the Australian National University and is a qualified and experienced energy sector review expert for the UNFCCC. He returned to Australia in October 2019 following many years working on GHG inventory reviews in Europe. His expertise encompasses data management, development and interpretation of greenhouse inventory methodologies as well as training and capacity development for GHG inventory calculation. (has Graham OK’d this release?)

“The outcomes of this modelling will be tested against operational data that we will collect from the Cobber in operation at the Canberra demonstration centre,” said Michael McCann from Uniflow Power Ltd. “We will also be testing outcomes using unconventional fuels including various agricultural wastes where there is the additional element of avoided GHG emissions in utilizing the materials for fuel that might otherwise have been burnt in open piles or left to decompose.”

Accurate modelling of the GHG balance of the Cobber is an important step to qualifying for various white certificate and carbon credit schemes in Australia and internationally. It is notable that the NSW Government announced in late September a planned expansion of its Energy Saving Scheme to include fuel switching to biomass fuels among other innovations to the scheme.

The NSW ESS has been operating for more than a decade and has provided hundreds of millions of dollars of white certificates to incentivize the installation of higher efficiency appliances and equipment.

“We would expect that the introduction of biomass fuels to the NSW ESS will eventually lead to the adoption of similar measures in other States including the Victorian Energy Efficiency Certificate scheme,” said Michael McCann. “These direct financial incentives from State governments have been instrumental in rolling out a number of new technologies in the past decade and the Cobber will be positioned to take advantage of these schemes in the future.”

A Cobber in Canberra

Supported by funding from Uniflow’s cornerstone investor, ReNu Energy Limited, and after overcoming logistical challenges and other COVID related delays, an advanced prototype of the Cobber has arrived in Canberra for installation at the Mugga Mugga Renewable Energy Demonstration Site. The Cobber is undergoing a period of testing and commissioning including integration of a data logging harness and connection to a 12kWh battery, prior to demonstration to government, business and the diplomatic community. Full operation at the demonstration site is expected to commence in November 2021. 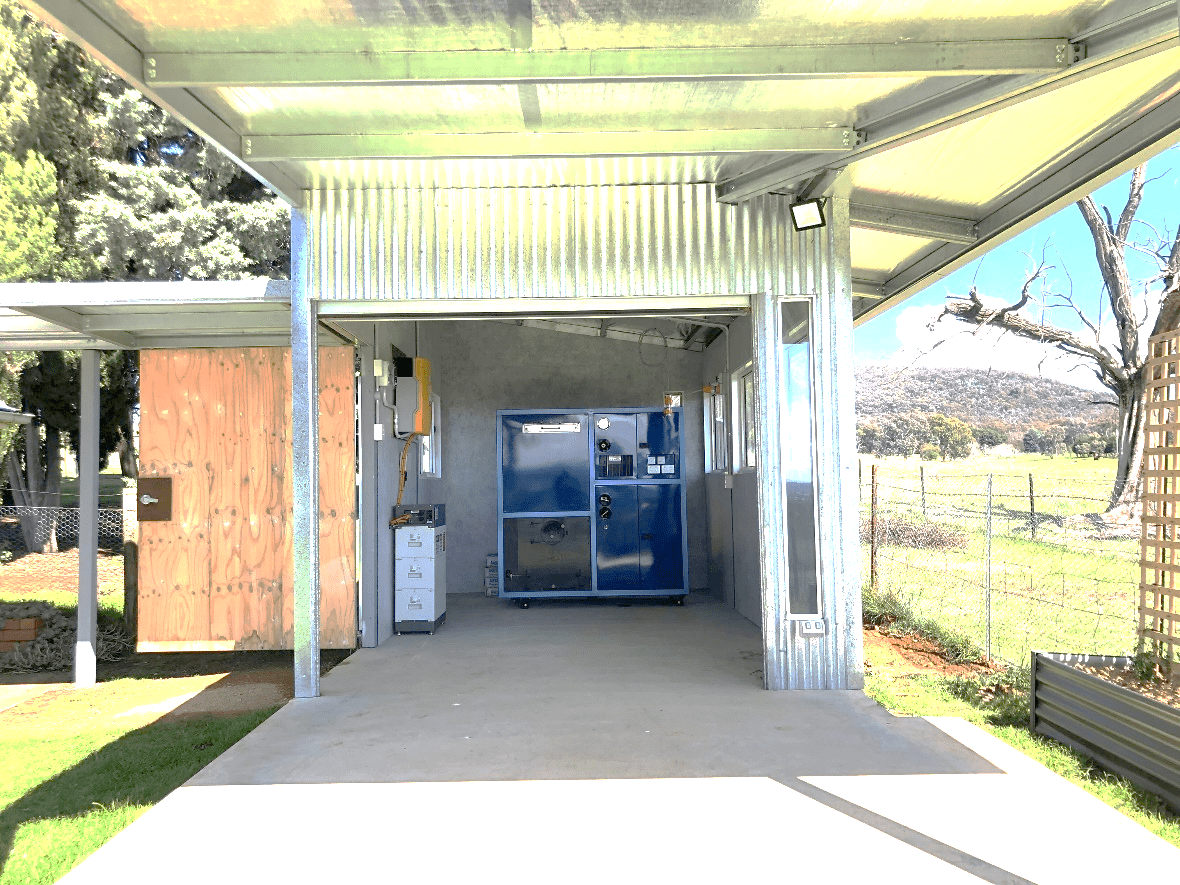 An advanced prototype of the Cobber renewable energy generator at the Mugga Mugga Renewable Energy Demonstration Site prior to commissioning. The 12kWh lithium ion battery stack is visible on the left.

The demonstration site will be used to demonstrate the overall energy efficiency and greenhouse balance of the Cobber in both electricity only mode and while operating in CHP mode, providing space heating to the residence on site. It will also be an R&D facility testing the the advanced prototype to model design control improvements to assist in finalising a ‘design for production’.

The base in Canberra will enable engagement with a range of institutions including the Australian Renewable Energy Agency which has a program specifically established to support demonstration of new renewable energy technologies in micro-grids.

While the Cobber is not yet available for purchase, Uniflow continues to receive a wide range of enquiries from potential buyers in Australia and overseas.

Uniflow has had a series of meetings with representatives from Argentina’s Institute Technologica Nationale Indusrtrie, a government industry, standards and research organization that is the equivalent of Australia’s CSIRO.

INTI has been running a modern steam program for rural and agricultural applications and is seeking to secure a Cobber prototype as soon as one becomes available for assessment as part of that program.

Daiana Borelli, the Director of Energy Research at INTI has told Uniflow that she would expect to house and operate a Cobber at INTI’s central research facility in Buenos Aires for a period prior to establishing a field trial at one of the organisation’s agricultural partners sites.

A term sheet for a collaboration has been agreed and is with INTI’s ‘International Division’ for drafting into a formal agreement.

The Kopernik Institute in Bali has been commissioned by Uniflow Power to develop four small village applications case studies for the Cobber in an Indonesian setting. Uniflow has had numerous enquiries from Indonesia about the Cobber including from parties who want to host demonstration sites and who are capable of distributing the Cobber in-country. In the short term Uniflow aims to identify a limited number of demonstration sites for the Cobber in Indonesia. One or more of these sites are likely to then evolve into collaborative ventures that could assist develop O&M documentation in appropriate formats and language, and provide training services in Indonesia.

Plans for the next quarter

Demonstrations in Canberra to potential partners, grant funders and interested investors will accelerate during the next quarter and decisions will be made about what program funding will be pursued. A number of options are available for grant funding including under the Modern Manufacturing Programs run by the Federal Government and various programs seeking to establish new manufacturing enterprises offered by various State Governments.

Three prototype Cobbers manufactured in India during 2019, and then stranded during the COVID events of 2020-21, are now being prepared for shipping from Mumbai to Australia. These Indian made Cobbers and spare parts will be completed and tested in Australia before being deployed into an engineering workshop likely to be established in Canberra or nearby in NSW, which will then become the centre for the engineering program to advance the Cobber to manufacturing.